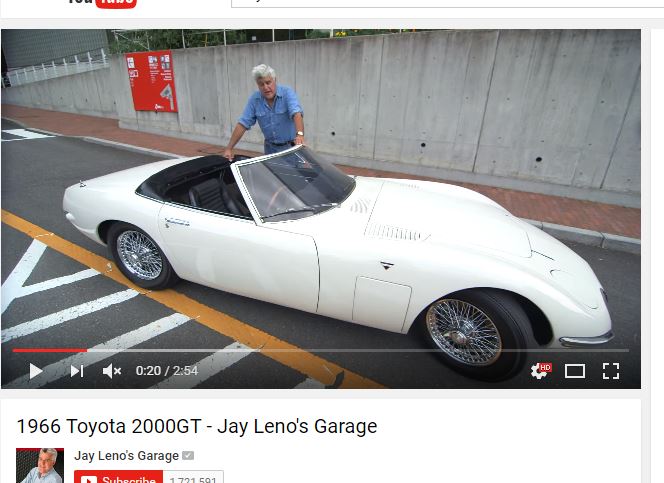 The Toyota 2000GT was a limited-production, front-engine, rear-wheel drive, two-seat, hardtop coupé grand tourer designed by Toyota in collaboration with the Japanese conglomerate Yamaha. First displayed to the public at the Tokyo Motor Show in 1965, the 2000GT was manufactured under contract by Yamaha between 1967 and 1970. In Japan, it was exclusive to Toyota’s Japanese retail sales channel called Toyota Store.

You may recognize the 2000GT from the 1967 You Only Live Twice or as one of the cars former Tonight Show host Jay Leno has shown off as part of his massive collection. The Bond Car is even more unique than the already limited edition “standard” version. Allegedly, due to Connery’s height, the film producers requested two open-top convertible models for the movie.

The 2000GT really hugs the ground with its highest point at just 116 cm from the ground. However, this vehicle is more than a collectors’ piece, it represents one of Toyota’s best achievement in terms of automotive engineering.  Not only is the 2000GT a Hollywood icon and a truly beautiful piece of automotive design and engineering, it’s also a proper sports car with its own incredible heritage.

In the 60s, to the outside world Japan was still living in the shadow of the events of WWII and within Japan it was still an era of post-war reconstruction. Japanese automobiles were not the juggernaut that they are today. When Toyota released the 2000GT they revolutionized the automotive world’s view of Japan, who were viewed as producers of imitative and uninspired practical vehicles. This was a sleek, high-performance fastback, and it demonstrated its auto makers could produce a sports car to rival the ones in Europe and the US.

Reviewing a pre-production 2000GT back in 1967, Road & Track magazine compared it favorably to the famous Porsche 911. Today, the 2000GT is seen as the first seriously collectible Japanese car and its first supercar. Only 351 were ever made and examples of the 2000GT have sold at auction for as much as US $1,200,000, making it technically the most expensive Toyota vehicle in history.

Most of the 2000GT’s design was done by Yamaha, which at the time, was doing much automobile work for other Japanese manufacturers, originally for Nissan rather than Toyota. Many credit the German-American designer Albrecht Goertz, a protégé of Raymond Loewy who had previously worked with Nissan to create the Silvia, as inspiration. He had gone to work for Yamaha in Japan in the early 1960s to modernize Nissan’s two-seater Fairlady sports car.

They had a prototype 2000GT built, but Nissan declined, and Yamaha then proposed the design to Toyota. Since they were already doing contract work for Toyota, who was perceived as the most conservative of the Japanese car manufacturers, Toyota accepted the proposal to improve their image. Toyota ended up employing a redesign from the prototype from their designer Satoru Nozaki.

The 2000GT was Japan’s E-Type, meaning it is a car that can run against the best that Europe had to offer and, frankly, win. It has since been credited with establishing the Toyota name as a force to be reckoned with in the automotive world. It may in fact be one of the greatest Japanese cars of all time.

Today, the Toyota 2000GT is has been most aptly described as “the best sports car you’ve never heard of.” Thanks to the cooperation between Yamaha and Toyota, the  sleek two-passenger coupe packs a two-liter inline six-cylinder engine with a cast iron block and double overhead cams, all giving 150 horsepower at 7,000 rpm and a top speed of over 135 mph.

Unfortunately, the 2000GT has never achieved the same fame outside of Japan as its European brethren, due to its rarity and the fact that few models were exported outside of its home country. As its wonders have begun to achieve recognition in recent years, surviving examples have become highly sought-after, and today, the 2000GT is universally described as one of the most collectible, desirable, and valuable Japanese automobiles ever produced.

What do you think of the Toyota 2000GT? What are some other cars that YOU would like to see featured on Shoptalk? Comment below with your suggestions. And as always, check back soon for more Throwback Thursday stories featuring the classic cars you love, seen in a whole new light!