How to Prevent Rust On Car & How To Remove It

Rust is like the blemish or acne of cars. It is a combination of cosmetic issues that could become a serious auto care problem if left untreated. Far too many otherwise drivable cars get routinely sent to the scrapyard due to rust and the effects it has on cars. And yet these ugly brown and sandy spots can actually be prevented outright, so why do we see so many rust buckets hitting the road every day? With cars being built with a mixture of different metals and alloys (some of which are iron-based), and iron is prone to oxidizing, which you guessed it… creates rust. Even with a mix of advanced coatings and solutions, the metal in your car can still succumb to the ravages of the environment. However, fear not, because your car is not doomed so long as you are invested in it.

Rust was in fact short for “red dust” because of its coloring and texture. There’s a whole thing about it but we don’t want to waste your time necessarily. It’s ultimately a simple regular folk term about the electrochemical breakdown of iron-based metals. That process is what your science teacher called oxidation. When this happens, the little molecules on the surface of the metal react to the oxygen in the air. Matter cannot be destroyed outright so instead the surface is re-arranged and transformed into a new molecule, Fe2O3 which if you paid attention in class is iron oxide. Over time iron and even most steels will wind up reduced to iron oxide and related elements. Notice how cheaply produced cars from the 70s and older tend to look a lot like raw and rusty sheet metal. It took a while, but those cars are now too far gone. Yours doesn’t have to be!

Prevention of Rust is Possible

You can actually prevent your car’s decay. Are you ready to learn how? Wash your car. It is literally that simple. If you properly wash, polish, and wax our car you can easily prevent vehicle decay. Getting rid of potentially corrosive debris, grime, salts, and dirties is essential. Now when it comes to lesser-known means to prevent rust, you should also be sure to double-check and clean out drain holes along the bottoms of doors and rocker panels. These are the places where rain and melted snow (water, duh) flow out. That’s why having a good pipe leaner can help clean and keep those smaller crevices nice and dry.

When You Have Surface Rust 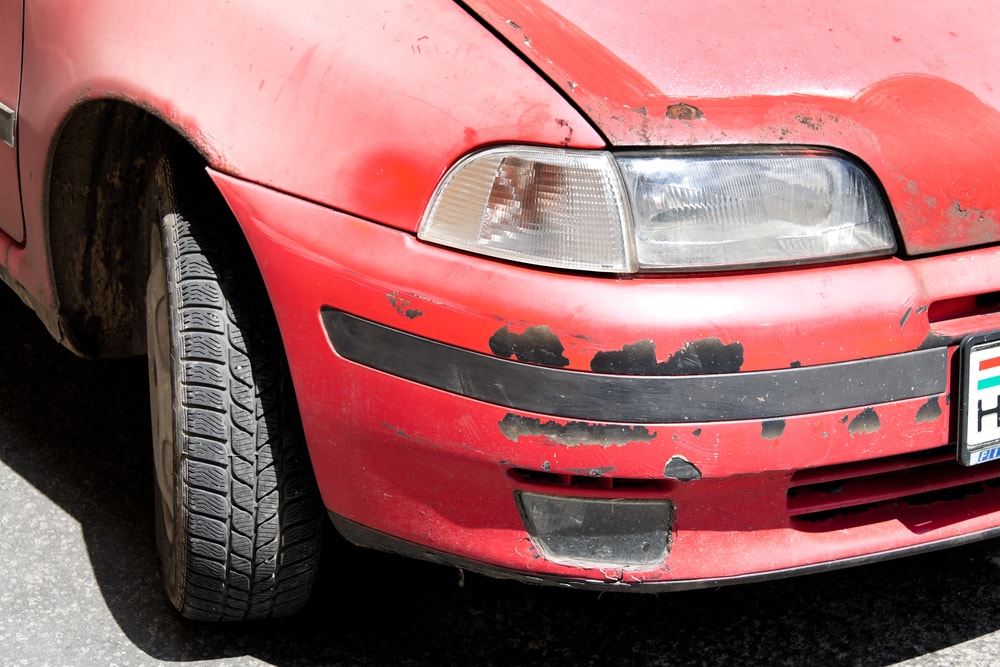 Surface rust is mostly formed when your car’s paint breaks down over time. This can be due to mechanical damage (those scrapes, scratches, and dents) or simply too much exposure to the sun’s UV rays over time. Believe it or not, it is actually incredibly easy to be rid of surface rust, however, it may take time and money. The trick is essentially to do the same thing you do when you want to paint or repaint your car. Use some sort of abrasive wheel tool or high-grade sandpaper to remove the paint and the corrosion itself until you get to the clean and bright metal. Then apply your primer and get to painting (see this article on how to paint a car).

Differences between Scales or “Bubble Rust”

If you elect to ignore the initial formation of surface rust well…you now open yourself up to a new problem on your hands: Bubbles. Also called “scales” because of the way bubbled rust shapes formed. These molecules of rust are actually physically bigger than the initial surface rust. This happens when the surface rust begins expanding and flaking before exposing the base metals…until those are corroded and rusted as well. When the rust begins going deeper than the surface, it creates “scales” or bubbles. Ultimately you follow the same rules as taking care of surface rust but with an additional step before you begin. You first need to make your way through the rust with a wire brush. Then you need to go further through the roughness before you bring out the abrasive wheel or sandpaper. Once you get to the shiny metal, apply primer and begin painting.

If you ignored the above stages of surface and scales what happens is that the base metal itself ends up flaking away to leave holes. This is the worst-case scenario. There are only two options now. One solution is to completely replace the ruined panel(s) which is costly depending on your make/model. The only other option would be to cut out the “rotten parts” before welding patch panels into place. If the actual frame of your car is rusting like this then the full integrity of your car is at risk. You must take it to an ASE Certified repair facility.

The tips above are definitely ways you can prevent rust from forming too soon, after all, you’ve spent so much money on that set of wheels the last thing you want is to have it eaten away by a microscopic chemical reaction. And remember, if you already have rust, it’s always treatable. And doing it sooner rather than later is the key here. If you’ve found an alternative way or home remedy to either protect your car from rust or treat it, we’d love to hear it! Let us know in the comments section below and stay tuned for more how-to guides on ShopTalk powered by Endurance.