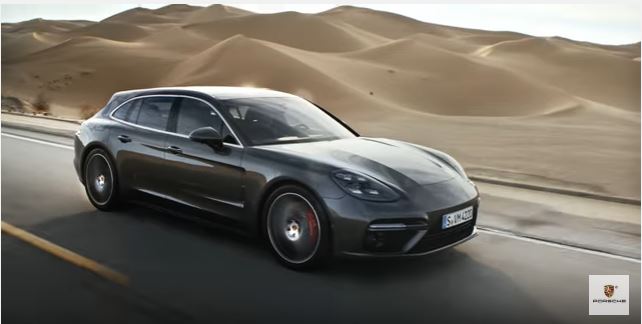 Hold off the soccer mom jokes for a bit, the new Porsche wagon packs 550 horses under the hood. And real talk: if Porsche decides to build something in any vehicle class, you can bet it won’t look like anything else.


The German sports car maker has expanded the rear of the Panamera sedan to make way for big swinging hatchback. As of the acclaimed Cayenne wasn’t enough, Porsche is racing for the drivers who want a practical Porsche (ok don’t laugh at that) but think an SUV is too much while a sedan is too little. The station wagon appears to be “just right.”

We have been reading mumblings about this project for a few months now but Porsche just OFICIALLY unveiled the first photos of its new wagon this March. The timing of this is close to the Geneva Auto Show where Porsche reps claim they will unveil a diesel and a Sport Turismo, and überturbo variant so those behind the wheel can feel like they are in a high speed race as they drop the kids off at soccer practice.

The PR from Porsche’s Weissach Development Center told the press that the goal for this car was to think of it in terms of being a Porsche first, station wagon 2nd.

In other words this is a Porsche that happens to come as a Family Truckster rather than a wagon with a Porsche marquee. In fact, Porsche waited to update its Panamera a little before considering a wagon. So if you go for this car you’ll have all latest and greatest toys and goodies equipped:

Engineering-wise, the car competes with Ferrari’s FF, a hatchback that tops 200 mph.

Neither Porsche nor Ferrari’s wagons can be ordered now until October.

HOWEVER…the asking price starts at around $96,000 and stretching up to $154,000 for base version of the Sport Turismo.

Of course, Porsche wasn’t expecting blockbuster sales. This is due to the fact that wagons have lost out as the family vehicle class to light SUVs. In the U.S. Americans bought only 77,000 stations wagons last year, according to a study from Edmunds. That’s less than half a percent of all vehicle sales.