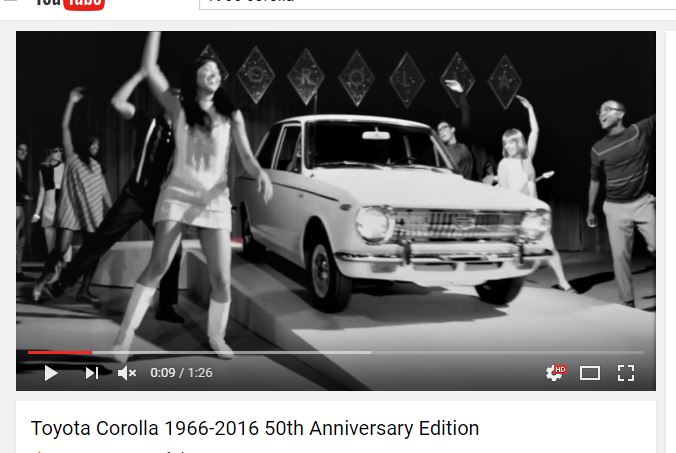 The Toyota Corolla was first released in 1966. That marks this year, 2016 it’s official 50th anniversary. For 50 years, the Corolla has been a cornerstone of Toyota’s vehicle lineup and we at endurance know the car quite well. In fact it’s a pretty safe bet that most people on earth have some memory of the car, be it seeing them on the road or the lot or even driving one or being a passenger in one. This car has been sold across all continents and is now entering its 11th generation, and you can bet there will be more of us making memories of  seeing, owning, driving or what have you in a Toyota Corolla similar to our memories of the Volkswagen Beetle. What’s that? The Corolla is not as iconic as the Beetle? We beg to differ.

First thing is first, no one could possibly have predicted that back in October 1966, the time Toyota first rolled out the humble KE10 Corolla across Japan it would take for the next 5 decades. The postwar optimism Japan helped guide their automotive industry’s future with the Corolla name—derived from Latin for “crown of flowers”—put Japan on the industry map. The Corolla led to scores of future chassis codes we are familiar with: TE27, AE86, FX16, XRS; Wagon, hatchback, coupe, sedan, rear-drive, front-drive, AWD.

Jump to the funkadelic world of 1974, where the Corolla became the best-selling car in the world. THE WORLD. A scant 3 years ago in 2013, Toyota sold about 40 million Corollas. In sales figures alone, the Corolla surpasses most automotive stalwarts, including the Beetle we mentioned but also competitors like the Volkswagen Golf, Ford F-150, and the Mini Cooper. It has longevity unmatched by even the Chevy Impala or the Mitsubishi Galant.

Toyota has every right to laugh a little, when the 2013 Corolla was unveiled, they brought comedian/disc jockey Adam Carolla onstage *cue laugh track*. The fact that the make/model has not only survived but thrived is a big part of why the seemingly bland Corolla deserves recognition. Toyota reps once said “for every Ford Mustang, there are a hundred thousand Corollas” (Road & Track).

More than a hundred thousand Corollas have found themselves drenched in Thailand, skating through dirt roads in Kenya and cruising through Siberia. We can’t even begin to imagine how difficult it would be to actually make a car capable of satisfying needs around the world. It is the quintessential “cheap cars.” In fact the Corolla is widely bought as a new driver’s first car. It was the first time someone felt the power of vehicular mobility.

Current Toyota CEO Akio Toyoda once claimed, “My used 4th generation Corolla 1600 GT was like a best friend to me. I shared my youth with it!”

Last week at the at the New York International Auto Show, Toyota announced that they were commemorating this milestone with a special 50th Anniversary Special Edition. This edition comes in Desert Sand Metallic familiar to classic Corollas and also in a light-ish purple. Only 8000 50th Anniversary Corollas will be produced and sold in America. More than a makeover for its birthday The new Corolla has undergone a redesign for 2017. This commemorative edition comes with exclusive 17-inch alloy wheels, unique LED headlights, and a plethora of interior upgrades including a full “Entune” infotainment system. This may seem like a modest upgrade, but the Corolla is a modest car. Special Edition and Anniversary badges that adorn the car will be of note future buyers as the Corolla gets handed down like the Corollas of yore will be a mark of pride.

Whether you are thinking about a supercomputer pr a bottle opener the fact of the matter is that any product that does exactly what it’s sold to do and does it without any fuss is inherently valuable and deserves recognition.  The Corolla may be like a beige pair of khakis, but sometimes the simple unpretentious things never go out of style.

To the 50 years of the Corolla and hopefully another 50: You are Toyota!