The Most Iconic Cartoon Cars Throughout the Years

The great thing about animation is that you can imagine literally anything. You are not bound pesky things like reality. So it is pretty safe to say that as awesome as those cars you remember growing up with in cartoons aren’t up to any real engineering standards. I mean think about it, you have wild passenger and storage compartments that don’t obey the laws of physics. Beyond their design keeping with the often exaggerated make-believe worlds they inhabit, they never seem to act like any car that exists in real life. Today on ShopTalk, we are taking a peak at some of the Endurance staff’s favorite cartoon cars. Some of us even have toys of these on our desks.

Fred Flintstone’s Stone Age family car doesn’t have horsepower: it has foot-power. Hannah Barbera’s pre-historic cartoon riff on The Honeymooners saw either Fred or his best friend Barney pedaling their way on stone rollers on a tree-trunk chassis. It’s the perfect vehicle to take to the drive-in theater where you’re guaranteed to have a gay old time! 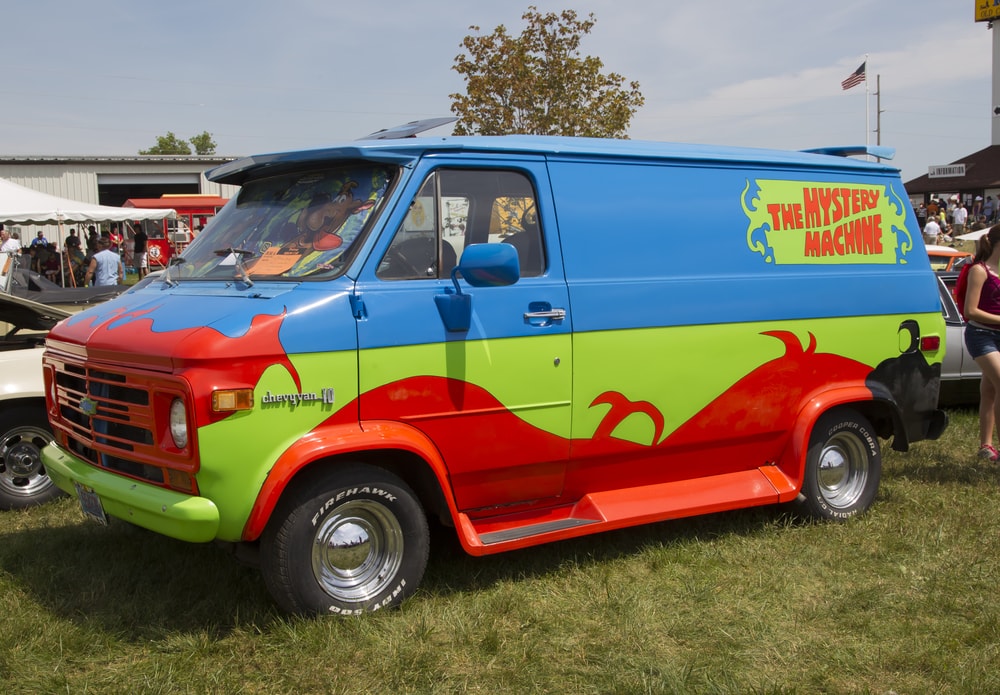 The Scooby gang’s  (Fred, Daphne, Vela, Shaggy and trusty talking dog mascot Scooby Doo) trusty car, the Mystery Machine has often been mistaken for a Volkswagen minibus. It’s a fairly common minivan and the fact that the series relied more on an instantly memorable silhouette and psychedelic paint job than anything means it could be any minivan. Most fans and gearheads believe this was based on the 70s Chrysler minivan but according to the series creators it was actually the Ford Econoline. According to the Scooby Doo website, the Mystery Machine has the uncanny ability to adapt to any given situation (and the conveniently packed items that might be needed in any given situation).

The backstory about the Japanese/American co-produced series Speed Racer is really interesting. It was one of the first Japanese cartoons imported to American audiences. At the center of the show was hotshot racer Speed and his trusty vehicle, the Mach 5. Word is that the Mach 5 was passed in part off of Elvis Pressley’s Viva Las Vegas Cadillac and the James Bond Aston Martin DB5. And yet there’s an eccentricity about the car that feels more of a piece with Japanese comic books and cartoons. One was a steering wheel that had a special button to help Speed out of nearly every vehicular predicament. Undoubtedly that inspired a whole generation of engineers to try to come up with similar gadgets in real life.

We could talk about Homer’s busted pink sedan but instead we’re talking about Marge Simpson’s “Canyonero” family station wagon. One of our favorite Simpsons jokes was the fictional ad campaign of the Canyonero, calling it “Sixty five tons of American pride.” The fake theme song was bases on the then-infamous “Rawhide” credit roll and “Wild West” ads for the Ford Excursion cars. The matriarch of the Simpson family, Marge’s Canyonero is a stereotype of your typical family wagon and animators often re-size it depending on an upcoming joke or visual gag. In real life, no cartoon parody can match the excess of some modern family vehicles.

This safari-exploring family lived their life on the go in the comfort of a “Comvee” mobile-home/SUV. In real life a company named Prototype Source, who love to take wild projects like bringing cartoon cars to life decided to fully realize the Thornberrys’ tiger-striped “Communications Vehicle” motor home. The same car they used to travel the globe in search of rare animals to find

So there you have it! These are five of the most iconic cartoon cars to ever grace our TVs on Saturday mornings. You may not think much of them, since none of them are real, but seeing a few toys of theme here and there in the Endurance offices says otherwise. Even fictional cars get the imaginations of gearheads going.