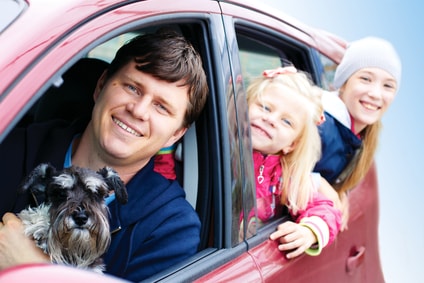 These days it takes more than going over the river and through the woods to grandmother’s house we go. A more appropriate song lyric would probably be: stopped on the freeway and covered in snow. To make matters worse, travel times during the holidays can more than double and with the kids in tow, it can cause the holidays to be a very hectic time if you aren’t keeping yourselves occupied.

But those of you wishing to stimulate your children, teens, or even yourself more than just turning on an iPad or loading another DVD into your vehicle’s entertainment system, check out the following list of fun road trip games to keep you and your family occupied during the long-drive.

We have compiled our favorite road trip games to play in the car during your holiday trip for both kids and adults. Best of all, these games are suitable for many forms of travel including planes, trains, and automobiles. We would love to hear your favorite holiday road trip games and traditions, so feel free to submit them in the comments section below.

5-Games Sure to Keep Your Kids Entertained in the Car

Road Trip Bingo: This fun game is sure to keep your kids entertained as it combines bingo with a scavenger hunt. The best part of this game is that you can find a great number of free printable bingo cards to use or even make your own in a modified Microsoft Excel spreadsheet. (For the tech-savvy families out there, there are even Road Trip Bingo apps to use if you want to avoid bing cards altogether.)

While some drivers may opt to give their child a marker to check off spotted items, however, we suggest using pennies to put on each card. Give each child a flat surface, such as a clipboard or hardcover book, to put on his or her lap. When a player spies an item on his card, he or she can mark it with a penny. Just like in the regular game of bingo, the first player to cover all the squares in a straight line wins. For younger children, allow four corners and the middle free space as a win.

Going on a Picnic: This alphabet-based game is great way for kids to enhance their memory and alphabet skills. And the best part is that you don’t need a game board or any materials. The game can be played with as few as two players, but it’s whole lot more fun when the whole family joins in. The first player says “I’m going on a picnic and I’m bringing…” followed by something that begins with A, such as avocado. The second player repeats what the first person said, but adds something that begins with B. So she might say “I’m going on a picnic and I’m bringing avocado and broccoli.” (Obviously you’re raixing incredibly healthy kids if they are bringing avocados and broccoli on their picnic.)

Continue this formula with C, D, and the rest of the alphabet. If someone forgets an item, she is out. To be fair, feel free to be lenient and give hints to younger players. The last player to be able to recite all the items on the list wins.

20 Questions: This is a super easy game that is great for younger kids, mostly due to its fairly simple rules. The first player thinks of a person, place, or thing. Every other player in the vehicle takes turns asking questions that can be answered with a simple “yes” or “no”. After each answer, the questioner gets one guess. Play continues until a player guesses correctly and wins the game.

License Plate Game: When some of us older Endurance employees were kids, everyone seemed to play the license plate game on family road trips. Armed with a pad of paper and a pencil, players would write down the name of each state as we spotted it. For younger players, feel free to create an easy checklist with the names of all 50 stats or images of their license plate. The goal, of course, is to check off all 50-states.

To take the game to a whole new level (and to add a little educational flair), we recommend using a printable map version, which will help a lot with older kids learning US geography. And for the littler ones, it will show how far away each car originated.

I Spy: Probably the most recognizable, easy to play, and most infuriating game after the five-minutes: I Spy. The game is simple enough “I spy with my little eye, something red.” This easy-to-learn game is perfect for preschoolers, and can keep them entertained for unbelievably long periods of time. The directions are simple: One person spies something and recites the line, ending in a clue. Everyone else takes turns trying to guess the mystery item. While this game can be an absolute riot for younger kids, take caution because once this game is started, it can last for a very long time.

5-Games to Keep Adults (Who May Act Like Children) Occupied on the Road:

Beat the GPS: Speeding is illegal and can get you in serious trouble with the law, however making up some much needed time during the holidays can be just too irresistible to not pick up the pace a little. We all know that everyone who’s ever even looked at their GPS while driving has played this game.

Enter your destination when you first enter your vehicle, note the amount of time the GPS initially says it will take you to arrive and see if you can shave off any time and arrive at your destination before time runs out. Some more hardcore players will suggest that any rest stops made will count towards the total time, but we believe in pausing the timer when getting gas, relieving your bladder, or just stretching your legs a little.

Padiddle: This game is one you probably all played in your high school days and probably shouldn’t have. Now that you are all grown adults, revisiting this game could be the thrill that turns your extended stay in traffic from unbearable to quite enjoyable.

The rules are simple: whenever you spot a car with a headlight out, you shout ‘Padiddle.’ Everyone then has to shout it, too. The last one to shout it has to remove an item of clothing. We recommend the driver sitting this game out, as it is a major safety hazard. You also might want to keep the game PG-13 as to not offend any other holiday drivers on the road.

6 Degrees of Kevin Bacon: Everyone knows of the famed game featuring none other than American treasure Kevin Bacon. The origin of the game started with the notion that at the time of invention, the actor Kevin Bacon was so popular and in so many films that you could relate him to another actor within 6 movies (or television shows, if you play that way) or less.
For Example:

But because this isn’t the 80’s, 90’s, or even early 2000’s, it might be difficult to link Kevin Bacon to many other actors or actresses. For a more updated game, we opt to just play what we call “Celebrity”. Pick two celebrities (Adam Sandler and Jennifer Lawrence) and try to link them within 6 moves or less.

The Alphabet game: Everyone knows how to play — you go up and down the alphabet picking letters out of words you see from the car. Go in alphabetical order, starting with A, and look for road signs, retail lettering, and any other words that start with the letter that you are on. For the super competitive players in the car, eliminate “exit” and “X-ing” signs for the letter “X”.

The Soft Drink Game: This final game is one that was recommended by a customer on our Facebook page, which we thought was too good not to include. The rules are simple: you buy a big pack of your preferred soft drink or give each player the same-size Big Gulp. You and your opponent(s) have to match each other can for can or gulp for gulp and the first one to cave for a bathroom break loses.

Our Facebook user said that they only played it the one time and doesn’t think they will ever play it again. They did mention that they were extremely grateful that they were not the one driving.

A great idea is to put your own spin on these games and make them your own. Add in holiday themes, research monuments or landmarks on the way, and most of all, just try to have fun. These games will be sure to make the time pass faster and fill your vehicle with holiday memories. And while we want you to have as much fun as possible this holiday season, but we also want you to stay safe and protected. Defensive driving is the best way to stay safe and extended vehicle protection is the best way to stay protected, call us today for your free quote and receive peace of mind behind the wheel this holiday season.

*A Vehicle Service Contract (VSC) is often referred to as an “extended warranty”, but is not a warranty.  A VSC does, however, provide repair coverage for your vehicle after the manufacturer’s warranty expires. A VSC is a contract between you and a VSC provider or administrator that states what is a covered repair and what is not. Endurance is an administrator of VSCs and does not sell warranties.*