The 5 Coolest New Cars at the Chicago Auto Show

The 2015 Chicago Auto Show felt a little different than past years as many companies and manufacturers seem ready to bring out their big guns. Why? Who knows? In our modern world where we are halfway through the 2010s maybe it’s time we start seeing the cars that we dreamed about in sci-fi future stories. Here are 5 of the coolest new and concept cars we saw during the auto show:

Chevrolet’s 2015 Corvette Z06 has race-proven design, packs advanced technologies and high-class performance. This might be the most capable Corvette model, ever. This is the first time the car has been offered in coupe and convertible models. The aluminum frame is strong enough to allow for its LT4 6.2L supercharged V-8 engine, expected to deliver an estimated 625 horsepower and massive 635 lb-ft of torque to the rear-wheel drive. The seven-speed manual transmission includes what Chevrolet dubs the “ Active Rev Match” feature and as alternative they do offer an all-new eight-speed paddle-shift automatic transmission presumably designed to enhance both performance and MPGs. 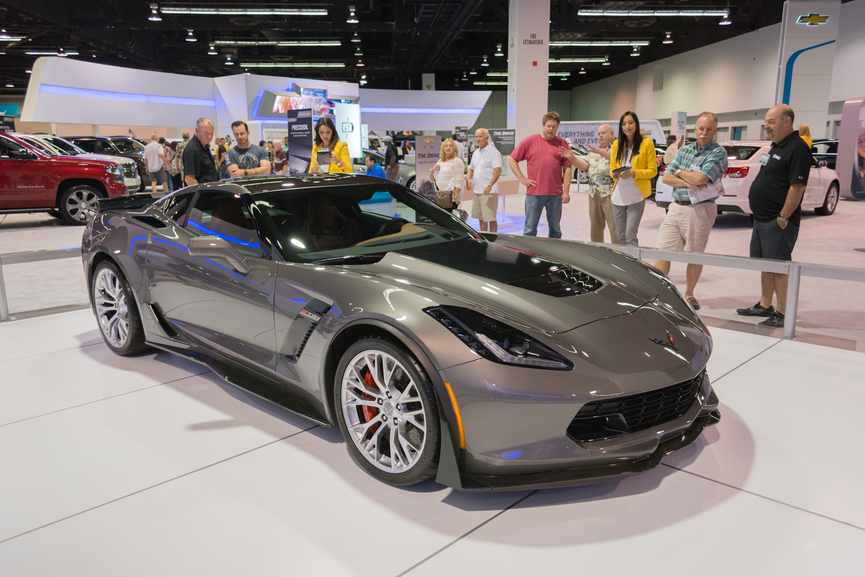 According to Chevrolet’s marketing, the Z06 blasts from 0-to-60 mph in 2.95 seconds with the eight-speed automatic and 3.2 seconds manually. The delays for the development of this car seem well-founded as it uses technology that was introduced in previous Stingray models such as: Direct injection, Active Fuel Management, or cylinder deactivation, and continuously variable valve timing. What all this techno babble means is that the Z06 is fuel efficient. The 2015 Corvette Z06 isn’t some retirement muscle car, it’s a genuine supercar.

This was a rare sighting of the exotic Bugatti Veyron 16.4 Grand Sport Vitesse. Bugatti touts the Vitesse as the best of both worlds by providing the elegance of the Grand Sport and the performance of the Super Sport. This baby has a maximum output of 1,200-horsepower (you read that right) and an outright sprint from 0-to-62 mph in just 2.6 seconds. The Vitesse is literally the fastest production roadster ever built, outracing the once famous McLaren F1 and making it into the Guinness Book of world Records. It truly is a beast! 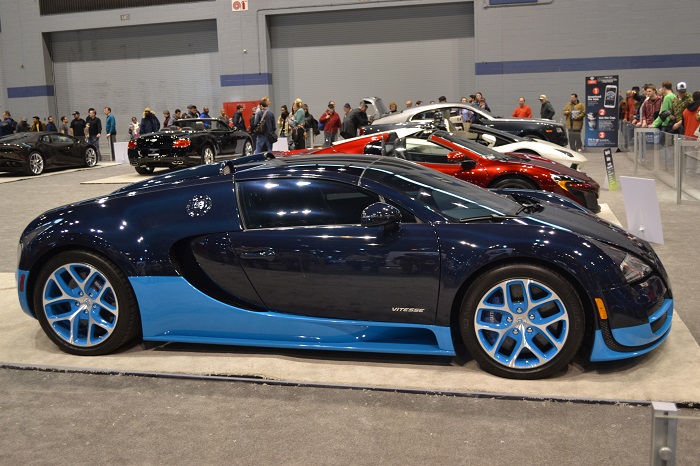 While the maximum speed can only be taken advantage of exclusively on closed tracks, the Grand Sport Vitesse is built with a special safeguard in “normal” handling mode, which electronically limits her to 233 mph. The Grand Sport Vitesse makes use of a full carbon fiber exterior, molded suggestively to exude luxury and power. This encases a lovely interior by which the elite of drivers can fully grasp the feeling of riding such a powerful beauty.

For years now, Toyota has been teasing motor enthusiasts with the possible return of the famous Supra sports car. The FT-1 isn’t quite that but what it actually is pretty impressive too. Technically a concept car, the FT-1’s muscular exterior builds on Toyota’s rich sports coupe heritage which dates all the way back to the 2000GT, Celica, Supra, MR2 and, most recently, the Scion FR-S. It will be easy to spot the aesthetic influences due to its opulent design. This is one sexy car but its beauty is sculpted for elegance and function: curved, muscular, expressive body forms seemingly shaped by the wind. Inlets, ducting, and vents are features of the exterior design that actually help reinforce its supposed track–ready nature with elements of purposeful airflow management. 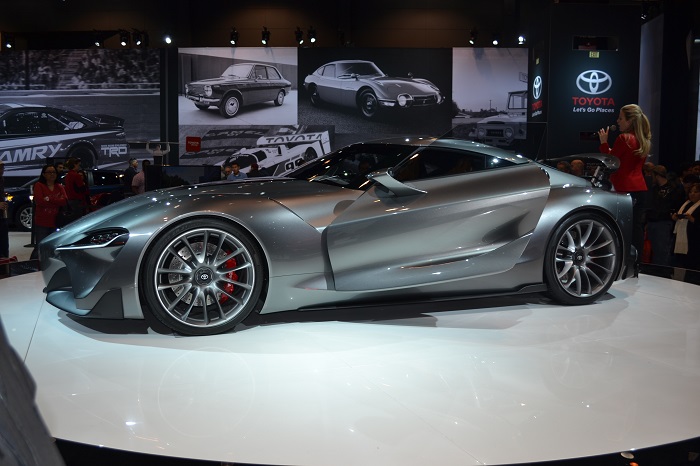 This beauty’s fine body expresses athleticism through taut surfaces and dramatic fender forms that seduce one’s eyes when graced with any of its unapologetically colored hues. She’s beautiful on the inside with all-natural-grain saddle leather on the seats, painted brown edges on the interior and the use of raised metal mesh. While technical specifications do not accompany this concept, one can assume that the FT-1 represents an ideal for Toyotas to come. Beneath her transparent glass hood, an ambiguous engine cover teases what is only left to our imaginations.

The long anticipated rebirth of the Acura NSX supercar is finally at hand. Sports car fans will not be disappointed with the styling, design, and specifications of the next-generation NSX. One of the first things you’ll notice is the low and wide proportions of the exterior with a design that blends exotic sports car form and supercar function. Every element of the exterior has been artistically fashioned for supposed total airflow management. Like its predecessors, the new NSX features a multi-material body; an aggressive-looking front design, the signature side intake and floating C-pillar to feed the mid-mounted engine. For nostalgic fans, note the tail-lamps which look like dead ringers for the original NSX. 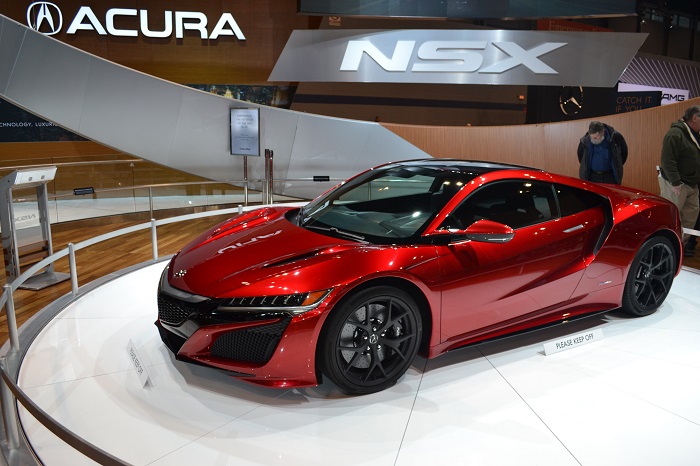 At the heart of this reborn masterpiece is an all-new twin-turbocharged V-6 mated to an Acura-developed nine-speed dual-clutch that would be capable of delivering lightning-fast gear changes . Acura’s trademark Sport Hybrid SH-AWD (Super Handling All-Wheel Drive) system potentially increases the supercar dynamic capabilities of the NSX. The combination of a twin-turbocharged engine with three electric motors (all at once), delivers conceivably instantaneous yet broad torque, with total system horsepower announced north of 550. Inside the NSX cabin you have form-fitting racing seats, “glove fit” steering wheel, and thin A-pillars for an un-obstructed field of view. Though there have been a few NSX models since it’s late 80s debut, this one really feels like the second coming.

The 2015 PORSCHE 918 SPYDER was probably one of the most popular exhibits at the annual Chicago Auto Show. It’s a rare model that combines Porsche’s pedigree motor racing technology with excellent everyday utility. According to Porsche, the core of the 918 Spyder is its distribution of propulsive power among the three power units controlled by an intelligent management system. The main source of power would be the 4.6-liter, V-8 engine that produces 608-horsepower, which was derived from the power unit used in the successful RS Spyder. That V-8 is coupled to a hybrid module that comprises a 115 kW 156-hp electric motor and a decoupler that serves as the connection with the combustion engine. 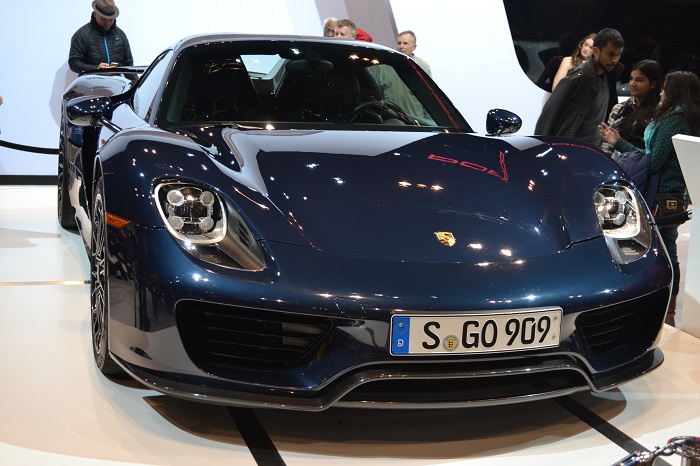 Like a comic book, there is a red “Hot Lap” button that will release the final reserves of the 918 Spyder and can only be activated in “Race Hybrid” mode. Hitting the button will push the hybrid battery to its maximum power output limits for a few extra-fast laps. This beastly yet elegant lady potentially demonstrates a hybrid drive to a degree never seen before: the simultaneous improvement of both efficiency and performance without one costing the other. This is the ideal melding of performance and efficiency that has been synonymous with Porsche and it’s ever-popular 911 model for decades and now it seems that Spyder will act as the top of the food chain for the Porsche sports cars of the future.

To be clear, there were tons of other cars shown during the auto show, it was hard to pick just 5 favorites! These cars however, represent the highest pedigree for their respective brands and those manufacturers seem really out to show off more than they have in previous years. Were there other cars that amazed you during the auto show this year? Comment and let us know!