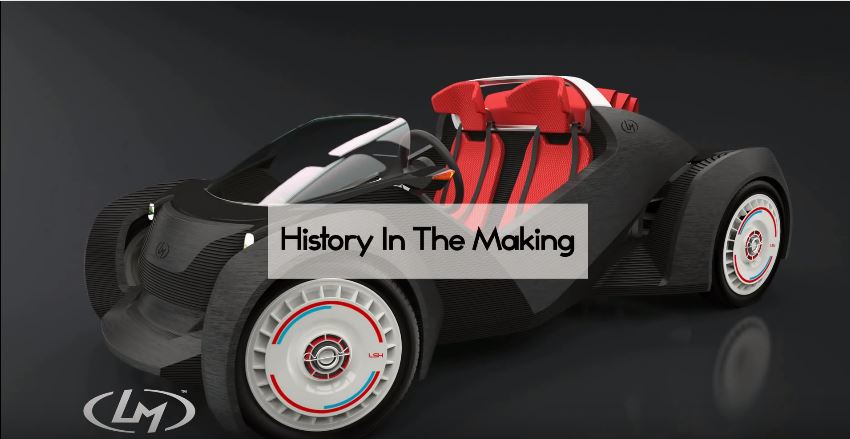 In the spring of 2015, Fiat-Chrysler CEO Sergio Marchionne made a statement where he called out the auto industry for what he believes to be a staggering waste of money. Specific waste he wants cut lies in the design and manufacturing of cars, some of which don’t make it to the public. He proposed that the industry should focus on eliminating redundancy. Spurred by the industry push, Local Motors CEO Jay Rogers seems set upon moving away from the old business model, the way we build cars the same way we did in 1915, on assembly lines and with thousands of individual parts. Local Motors does not believe it has to be that way, and the proof is parked in the CEO’s Knoxville, Tennessee garage, and it’s all charged up and ready for a drive.

Local Motors’ solution to changing the way we make cars is the “Strati,” the world’s first 3D-printed car. It’s a humble, yet uniquely sleek-looking machine. It was built, or rather, printed in Detroit, in collaboration with Oak Ridge National Laboratory in Tennessee. The Strati is a small electric two-seater, the first of many models in Local’s plans. So far there are two factories, scaled to employ 100 people each, which are under construction and set to be operational by the end of 2015. Local plans to build its own cars, and could potentially work as a supplier for original-equipment manufacturers, some of whom have met with Rogers already. This new means has high capabilities for inexpensive prototyping. That’s the radical big idea, the one that prompted the publication, Popular Mechanics to bestow a “Breakthrough Award” on Local Motors last year.

While the world’s first 3D-printed car is crude by design if you look at it by modern car standards, but it is but a mere first step. Its dashboard looks like stacked silicone beds from a caulking gun. Its flanks, meanwhile, are smooth, resembling the exposed parts of the BMW i3’s matte carbon tub. The sides were milled to show how that would look but most of the other parts are just how they came out of the printer so there is no doubt that they were made by one. In the future, it can look however anyone wants and the material the car is made from is completely recyclable.

The Strati is printed from carbon-fiber-reinforced plastic, which is a versatile, strong, and relatively cheap material that could potentially enable some new approaches to safety. Thanks to the nature of 3D printing, where the car is built in layers squirted from the nozzles of a massive printer, the makers can embed energy-absorbing crash structures or even strong seat-belt mounts that are anchored deep in the body. Springy bumpers can be bonded to the frame in order to cushion pedestrian impacts (right now Local is experimenting with a printable elastic polyurethane material they call “NinjaFlex”). And if the driver were to catastrophically damage the body/frame (or “tub” as Local refers it to), the owner  can actually unbolt the motor and suspension, melt the car down, and print a new one, it’s a gooey process and most car buyers might not be keen on melting cars, but it does have many potential applications. The Strati parked in Knoxville doesn’t even have seat belts, but it’s proof of concept.

The prototype Local has provided to journalists was reportedly printed over the course of  40 hours. The company is currently looking for an electric-powertrain supplier, so for now the Strati instead uses a beefy golf-cart motor as a stand-in. The rear-wheel-drive Strati  was envisioned as a city car, but Rogers isn’t blind to the performance possibilities. “If you put a motor with 150 or 200 horsepower in here, it would be a lot of fun,” he says.

The rear suspension rides on an aluminum sub-frame, and with no distinction between body and chassis, the car would feel inordinately solid, substantial. Obviously the golf cart motor would create some clunking  despite relative silence however if you were to put a performance motor back there who knows how the power-to-weight ratio would affect this..

The one-piece carbon tub they printed for journalists was based on the McLaren 650S that cost more than $300,000. The Strati, lackluster motor notwithstanding, would only cost about $5,000. No, it’s not a McLaren. But to a family of five that crams aboard a compact car to get around, as is common in the suburbs, it might as well be.

Developing countries might love this technology for cheap transportation, but so might the big-spending auto enthusiast who wants a thousand-horsepower car of his own design, printed in a production run of one. Perhaps the carmaker that wants to churn out a complete car in ten hours rather than 24 might like this as an alternative means of building their own ride too. Modern cars are more complicated than ever but the union of 3D printing and electric propulsion—where the motor has just one moving part—points to a future in which that’s no longer a given. We as drivers and customers take it for granted that cars are complicated and expensive. When you look at something like the Strati, it’s easy to imagine a day when we take it for granted that they’re not.