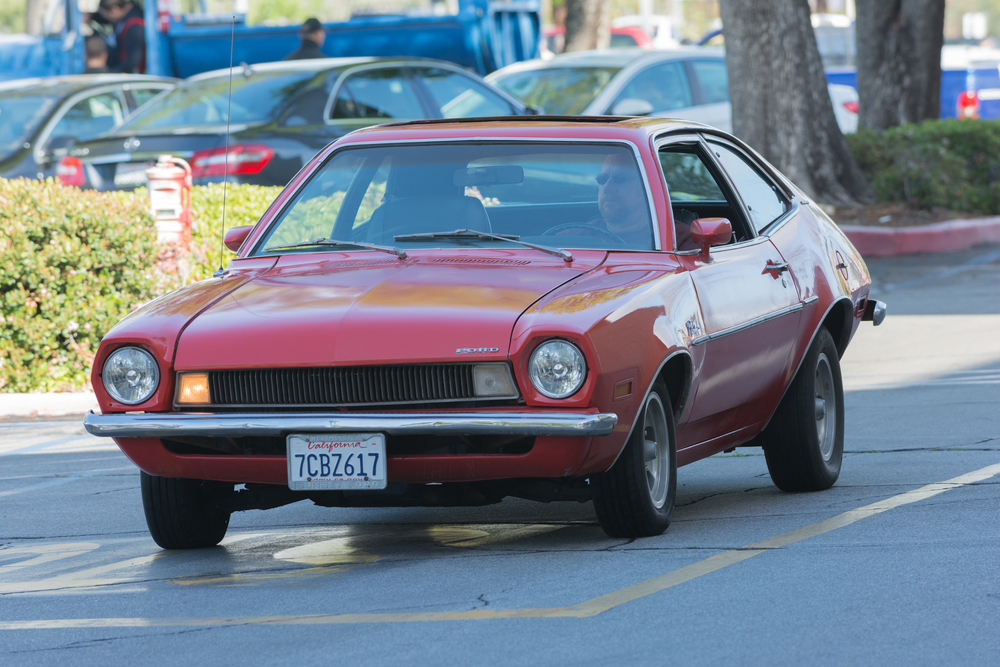 From vinyl seats to fake wood panels attached, cars from the 1970s had some strange design choices. They were either “bad’ or just flat out bad. Station wagons were everywhere, 8-track players boomed the hits of the yesteryear, and someone got all funkadelic and decided that it was a solid idea for a three-wheeled car to reach mass production. The cars we’ve assembled for you aren’t the best-looking by any stretch of the imagination. However they have some soulful character that has kept them from fading into disco-fever dreams over the decades. Here are some of our “favorites.”

Oh, yeah. Imagine being a teen in the 70s and rolling up to pick up your prom date in a Pinto CW. It has those bubble rear windows and the bold (often yellow) paint schemes of 70s van-madness, making this more like a petite conversion van, not a shooting brake. Most CWs came with a 2.3-liter four-cylinder engines, though some actually had a decent the 2.8-liter V6.

Chrysler takes meaning of “personal luxury car” literally and to the strangest ends when it designed the Cordoba. Hemmings describes the absurdly long 215.3-inch body as “barge-like” and that is not a compliment. To put things into perspective, that’s substantially longer than the current GMC Yukon SUV. However, as large as the Cordoba was, it still only sat a mere four passengers.


Okay, so “The Thing” as in “the Thing from another world” as opposed to the Marvel superhero had another name: the Volkswagen Type 181. However that’s nowhere near as fun as calling it “The Thing.” Because that’s what this ugly creature is.  It was a four-door soft-top that looked like a VW Beetle that had been designed using only an elementary school ruler. It somehow escaped the factory and was sold in the U.S. in 1972 and stayed on the market until 1975 when it was discontinued because it actually failed to meet new safety standards. Look at this thing, can you honestly say you’re surprised?

I’ll admit, the Pacer isn’t half bad. Keyword being “half.” As a car it drives ok with a  The Pacer was full of odd quirks, like weird pudgy stance and a passenger door that was bafflingly larger than the driver’s door. I can’t even. It was the dork of 1970s hatchbacks, and that’s exactly why it’s “cool” at least to fans of the 90s Wayne’s World movies. I guess people really love the novelty of a car that looks like an upside-down bathtub…mobile.


Ok let’s keep it real: despite looking like a soccer-mom ready wagon, don’t let the Vista Cruiser fool you: this packed a serious punch. Actually it packs too much. In an archived review from 1970, Car and Driver reported the Vista Cruiser 455 over-steered. “You got that?” readers were asked. “. . .BUT what we were astonished to find that it wanted to go around with its tail hung out and the steering steady on neutral.” Well, with a V8 that made 390-hp, it was probably hard not to step the big junky rear out.

The Bond Bug looks eerily similar to the Reliant Robin, and it was no coincidence: the Bug was actually created from a partnership between Reliant and a Czech designer named Tom Karen. When it came out, the Bond Bug was more expensive than a Mini, but it could hold a crowd of spectators better than any Mini ever could have…but not for the best reasons. You know that little wagon you hook up to your bike when you take your kids out for a ride? That’s what this cheese-wedge looking thing basically is.

The Bricklin looks like someone smashed a DeLorean into a an electric razor with an turtleneck sweater. If psuedo-“futuristic” cars are your thing just note that it has mostly been criticized the most for its badly-made interior: a low roof, poorly placed gas pedal, lumpy seats, and bad visibility. The gull-wing doors are cool, but that isn’t enough to make up for a cheap-feeling and looking body.

Say man, those are some baaaaaaad cars. And I mean that literally. These cars are snapshots into the questionable “style” of the Disco-era and hopefully whenever 70s nostalgia hits the culture big time it won’t affect the deign of the cars. Groovy?