Unleash the Beast: A Look Inside the Presidential Motorcade

It’s President’s day and as a fitting homage to the holiday we thought we would give Auto-enthusiasts a little peak into the Commander-in-Chief’s signature ride. The tastefully minimalist yet iconic limousine is called “The Beast,” but it might surprise you to learn that the President’s massive Cadillac (as of this writing) isn’t actually a Cadillac.

There are about a dozen of these waiting in the President’s highly classified motor pool, with each costing upwards of $1 million each. And if that wasn’t enough, the cars all travel with their own mechanic, who doubles as an armed federal agent with an arsenal of electronic diagnostic devices and tools. 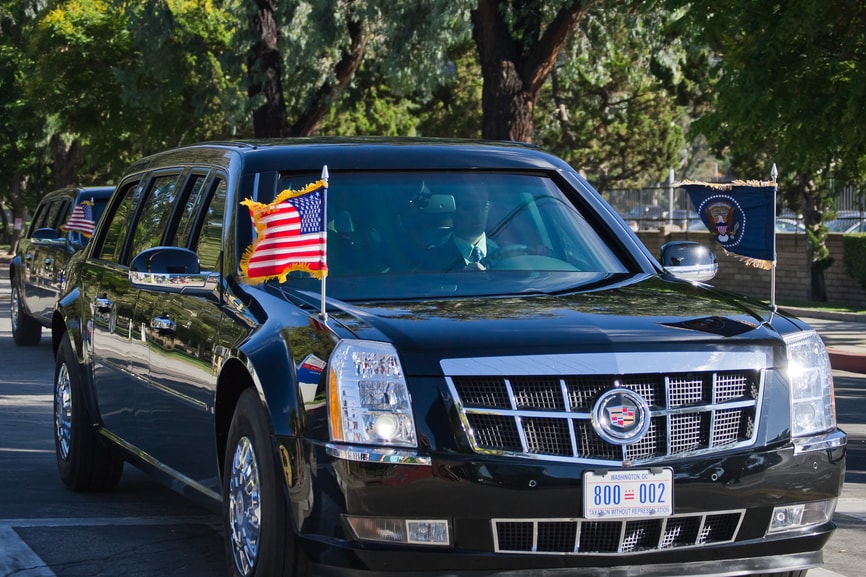 The Presidential motorcade has come a long way since JFK’s open-top Lincoln. Until the administration of President George W. Bush, the Secret Service bought what would be the presidential limousines off the lot AND THEN modified them with classified aftermarket products and systems.

But these days the cars are pretty much built to order. This was due to the fact that stock presidential limos kept breaking down over the years. With all of the extras the agency added to each vehicle, it began to create excess stress and weight beyond the manufacturer recommended operational limits of the original cars. As a result, the transmissions and even the brakes often failed. And we all know that it isn’t a good idea to have the most powerful person in the country riding in a vehicle with brakes that could give out at any moment.

As per its special mix of modifications and specifications (what the U.S. government has released to the public, at least).

The fuel tank is armor-plated, with an additional encasement in special foam to protect it from rupture due to collision-or small-arms fire. And in the event that a fire does break out in the vehicle, there’s even an onboard fire-suppression system, just in case.

The trunk is packed with a cache of extra weapons for Secret Service, while under the President’s seat there is a separate oxygen supply and emergency medical equipment, including bottles of the president’s blood type in case an ambulance (one is always traveling in the motorcade) is made unavailable.

As formidable as the name implies: the military-grade armor plating is thick and so are the bulletproof windows and fiberglass fenders. The tires are Kevlar reinforced as well. However, the doors are so heavy that it’s nearly physically impossible for the passengers to open them from inside without assistance.

The luxury interior is built almost like a panic room, sealed from the outside in case of attacks. However there is also an encrypted satellite phone and interactive video system so for secure video conferencing with other officials.


All Secret Service agents assigned to chauffer the president from place to place must take an intense week-long defensive-driving course on a special track at the Secret Service academy in Beltsville, Maryland. They are trained on evasive maneuvers, high-speed cornering, and precision driving. Aside from security concerns, one would imagine a vehicle that stretches over 18 feet long must be difficult to maneuver.

Though it’s a model of safety, luxury, and technology, the car isn’t that impressive as far as performance goes. “The Beast” is burdened with lugging a rumored 20,000-lbs worth of weight and can only hit 60mph in 15 seconds, well below most modern commercially available sedans. It is also rumored that the big car’s top speed maxes out at 60mph on top of sipping fuel at a rate of 8 mpg. Still, one must admit the taxpayer’s money did go a long way for our Presidents’ commute.