BMW likes to be known as “the ultimate driving machine,” and as such the German engineering company has had a rich history. Bavarian Motor Works was founded in 1916 in Bavaria, Germany and was established after the Rapp Motorenwerke aircraft manufacturing firm restructured. The logo is a tribute to BMW’s planes (the propeller) but after World War I in 1918, BMW was forced to cease aircraft-engine production by the terms of the Treaty of Versailles. Due to these restrictions, BMW focused on motorcycle production followed by automobiles in 1928–29. Since then, they have had an extensive line of motor vehicles of all sizes and classes.

One of their most famous was the “Z” series of “roadster” vehicles. The Z or “Z1” was released by BMW to the press in 1986 and later officially presented at the 1987 Frankfurt Motor Show. Initial demand was so fierce that BMW had 5,000 orders before production began. However, demand dropped significantly around 1988 and BMW ended production in 1991 where it was eventually replaced by the Z2, Z3 (as seen in the James Bond film, Goldeneye), Z4 and the limited run Z5 (as seen in the James Bond film The World is not Enough). However we are here to talk about the original, a performance vehicle that offered a different feel than BMW’s trademark sports-tuned “M” series: the Z1 Roadster.

What makes this car so special and such a unique part of BMW’s history is that the BMW Z1 was used to develop and debut several new technologies. Z1 designer Harm Lagaay mentioned that Z1 production helped generate patents for BMW’s high-intensity discharge lamp, integrated roll-bar, door mechanism, and underbody tray. The Z in Z1 originally stood for Zukunft (the German word for “future”) and would later be used on the later cars in the line. All of these vehicles (including the Z1) are two-door roadsters. Roadster (sometimes called “spyder”) meaning any open two-seat car with emphasis on motorsport-ready performance or appearance. The chassis was specially designed for the Z1 and features a number of innovative features: such as completely removable body panels (for easy modification and made of plastic), and dropped doors. The Z1 was only “almost” completely original save for the engine, gearbox, and front suspension, which were borrowed from the BMW E30 325i and 325Ix.

There was an emphasis on customization with the Z1. No two owners should have the same car. During the Z1s launch, BMW suggested that owners purchase an additional set of body panels and change the color of the car any time they wished. The car could even be driven with all of the panels completely removed, similar to the Pontiac Fiero. According to the original marketing material, the whole body could be completely replaced in at least 40 minutes.


The entire vehicle was designed with aerodynamics in mind. The entire under-tray is flat and the muffler and rear valance were designed to decrease turbulence and lift. And the overall car was notable for minimizing drag. The doors retract vertically down into the car’s body instead of swinging outward or upward. The inspiration for these doors came from more traditional roadsters which often feature removable metal or cloth doors. Meanwhile, the engine (the BMW M20B25) and the five-speed manual gearbox (the Getrag 260/5) were sourced from the E30 325i. The 2.5 L (2,494 cc) 12-valve SOHC straight-six engine produces 168 hp at 5,800 rpm and 222 N·m (164 lb·ft) of torque in its original form.

Their first official roadster was only produced with 8,000 models. The most of them were only sold in BMW’s native German market and Italy. Unfortunately, due to being only able to build 10 to 20 Z1 vehicles each day, none were initially sold in North America (although examples have been independently imported). And before you knew it, the car was discontinued in 1991. Nowadays, the Z-series comes back every so often, with rumors spreading about a line relaunch. But you can certainly feel the DNA of this car in the later BMW roadsters and even the M-series. As it stands the Z was exactly what it stood for at the time: the future. 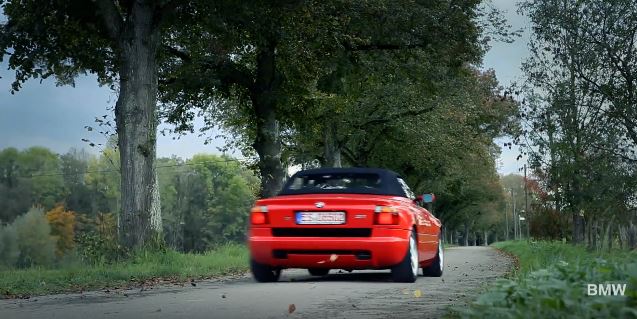 Check out more photos in the gallery below and bookmark Shoptalk by Endurance for more automotive articles to get your engine running!