With SPECTRE releasing worldwide 007 and Aston Martin are flaunting one of the biggest stars of the film, the Aston Martin DB10. While the car is not yet out for the public it has managed to make the rounds on a “press tour” of sorts.  Announcing the tie-up last year, Aston Martin chief executive Andy Palmer revealed that the DB10 would be made in a run of 10 units, all of which are expected to be used in the film’s production rather than be offered for sale. “The most exclusive DB ever,” is how Palmer described it. “It’s 10 cars total run – let’s hope James Bond doesn’t wreck them all!” he added. The 10 units were actually handmade at Aston’s Gaydon headquarters, where the car also designed and engineered.

Announced by director Sam Mendes and producer Barbara Broccoli as part of the film’s official pre-launch activities on the 007 Stage at Pinewood Studios hosted by EON Productions, the DB10 continues the 50-year partnership between Bond and Aston Martin, which stretches back to 1964’s Goldfinger. While the DB10 will not make production as it is in a limited run, the model is also understood to show off Aston’s new look, which should translate onto the brand’s road cars by 2016. It most closely previews the DB9 replacement. 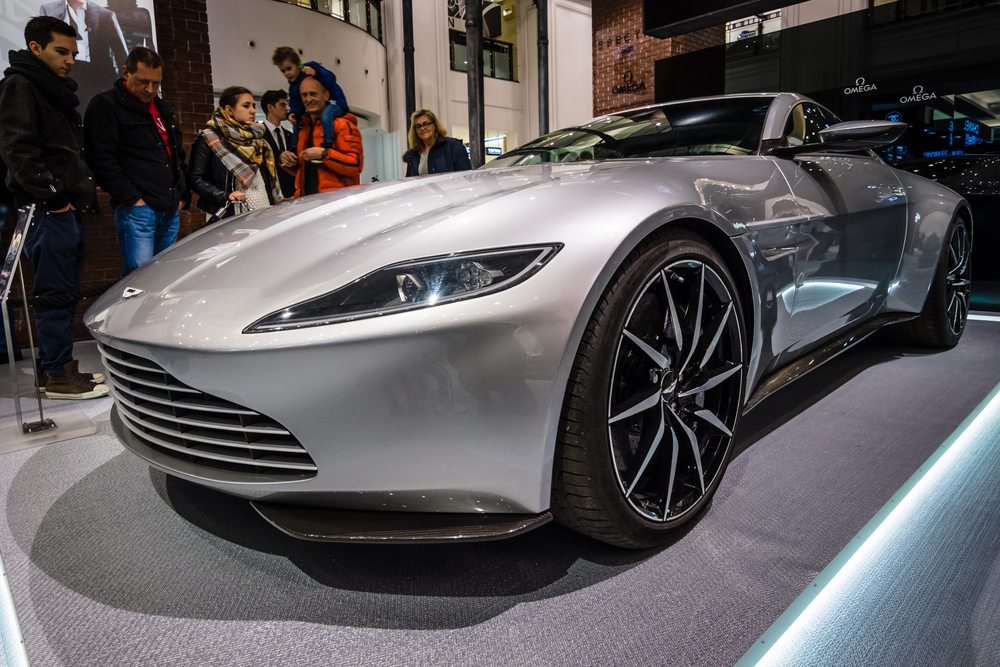 The revitalized Aston Martin is expected to eventually be the DB9 replacement, and it brings with it a new lightweight aluminum architecture and a new range of engines supplied by Mercedes-AMG. The DB10 previews the look of this car – a complete departure from the current familiar design language. The DB10 features sharper, stronger creases which lead to stockier, shorter rear end. The front grille is instantly recognizable as an Aston Martin, though, albeit much lower and wider. An all-new headlight design features at the front. Deep air vents in the wings emphasize the width of the front track. The proportions of the car sit between the existing Vantage and DB9. The overhangs are very short, and the familiar curves in the A-pillars lead to an all-new side window graphic. There are hints of DP100 concept from earlier this year in the rear and sills. It also features a large one-piece clamshell bonnet that looks to open backward, suggesting the bodywork could all be made from carbonfiber.

There was been lengthy debate as to the name of Aston’s DB9 replacement, but DB10 was settled on for the Bond car. However, as just 10 units will be made, it’s believed that the full production version that will follow it, incorporating elements of the DB10’s look but perhaps under a new name. 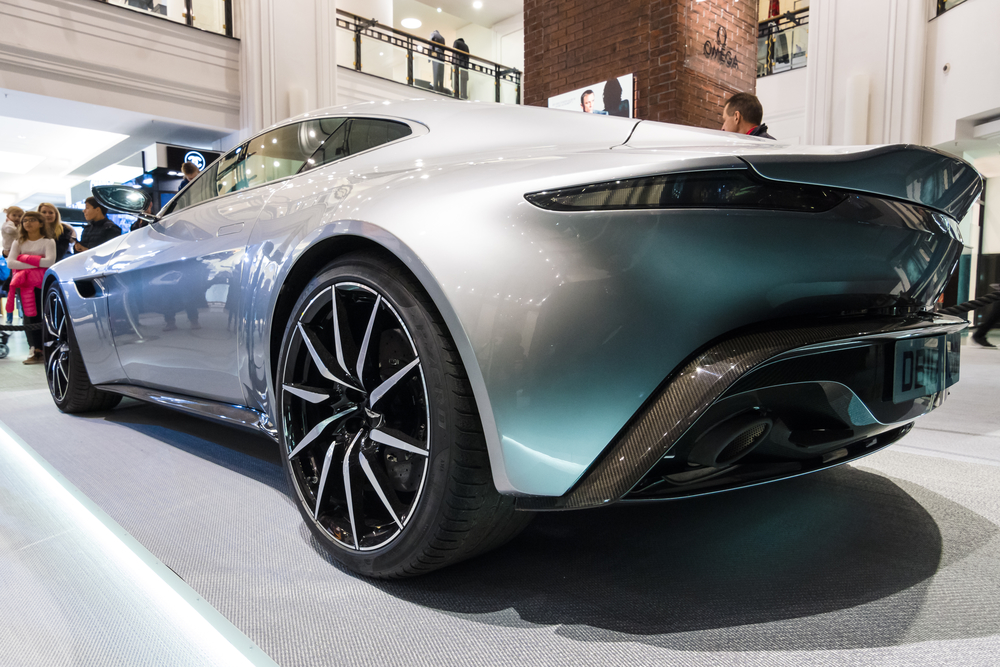 You can thank Aston Martin Design Director Marek Reichman for this vehicle when took up the challenge, drafting the design himself and producing all ten models in just five months to be ready for shooting a crazy car chase through The Vatican and the streets of Rome.

In the film the car is fitted with gadgets, and with the release of the trailers for the film we learned there will definitely be a flamethrower of sorts fitted to Bond’s Aston, blasting the Jaguar C-X75 chasing him through Rome. Interviews also hint at another gadget in his article, with an all-too-familiar feature on the gear shift. If you’ve ever seen the classic Aston Martin DB5 in Goldfinger or Skyfall the first thing that comes to mind is the infamous “ejector seat.” 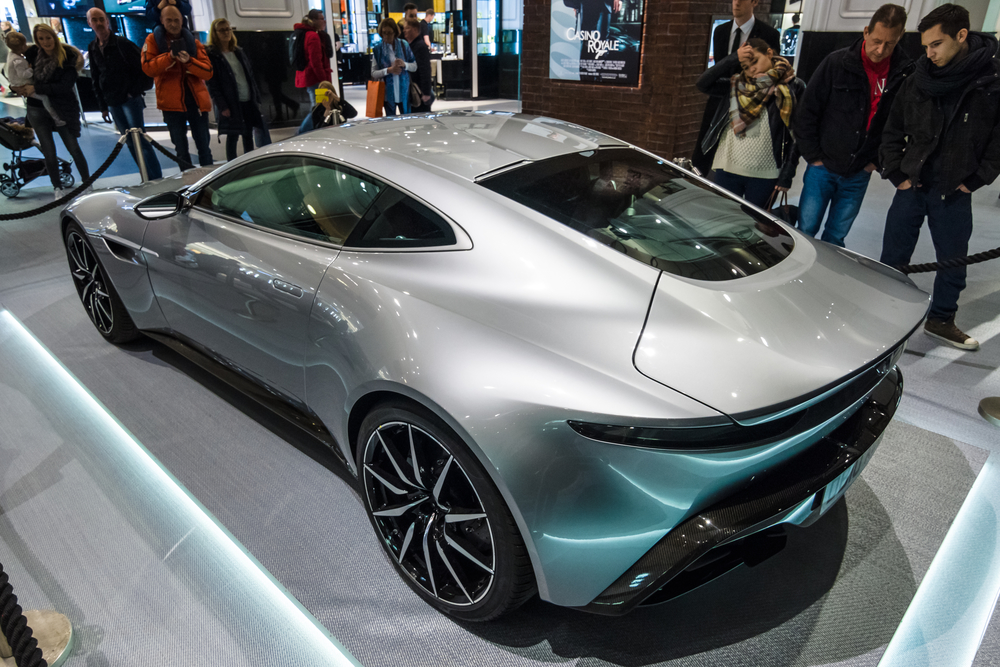 The line “I never joke about my work, 007.” from the film’s gadget guru Q (Ben Wishaw) comes to mind.

The design of the car is relatively revolutionary for Aston, ditching traditional slatted vents in the hood for pin-hole like designs to let heat escape. The roof of the car also features a Zagato-like double-bubble, adding to the flowing lines of the car. Meanwhile the mechanics and specs of the car show a sort of parts-bin approach, which aided the accelerated timeline, featuring the old Aston Martin V8 and chassis components from the company’s current lineup of cars. Of course this fits the themes of the car of blending the past with the future of the brand. Besides, if you’re going to knowingly wreck all but two of the cars in filming, cutting corners is more than welcome.


There’s no official word on what exact engine lurks under the DB10’s hood unfortunately, but it’s likely Aston Martin is using the car to show off their brand-new, 4.0-liter V-8. The car is expected to deliver around 500 horsepower and the DB10 will also use AMG’s seven-speed, dual-clutch transmission and a host of electrical systems. With the AMG combo, the coupe should was expected to be able to sprint from naught to 60 mph in less than four seconds on its way to a top speed in excess of 180 mph. Being a prototype, however the DB10 will have absolutely no soundproofing leading to the noise from the 4.2-litre V8 reverberating around the cabin. Meanwhile watch the movie and Bond will claim his car can do 0-60mph in 3.1 seconds – but while the DB10 is quick, the car’s 430bhp unit from the Vantage S can only do about 0-60 in so 4.8.

The DB10 is more than just a slinky piece of metal for the bright lights and big screens of Hollywood. It’s the first Aston Martin in 11 years to showcase a brand new design language, hinting at the next-generation of Aston Martins we could begin to see as early as next year in the DB11. The DB10, however, is a radical departure from the current aging policy and is set to mould the look of Astons for the next decade. Importantly, the DB10 will also go some way into raising the profile of the brand. Although Aston is having to make cutbacks as profits are down, a clear and promising direction has been set out by new boss Andy Palmer. Electrification with the DBX and RapidE shows Aston is moving with the times and the manufacturer’s blossoming relationship with one of the world’s coolest franchises shows the future is bright.